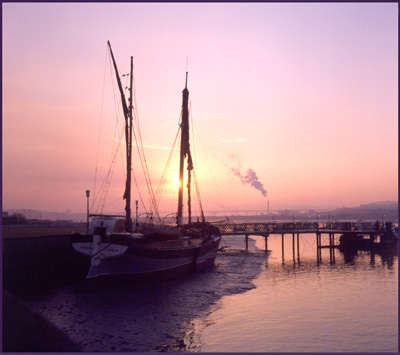 And so begins the narrative in Charles Dickens's greatest novel,Great Expectations.
The story begins in the churchyard near Pip's village. But where is the village, and which one has been used as a model for the one in the story? The village is not named once; it is only described, as usual, in Dickens's masterful style. However, there are clues, and from these we hope to place ourselves in that countryside and imagine the events unfolding, and the characters taking shape before us. So, in this discourse I hope to give some idea of the actual places described in the novel based on research, observation, and not a little logic.
Many people have their own ideas and beliefs on the subject. Many writers are convinced of their own theories and remain totally unswayed by others. This, as far as it goes, is fair and it will not be my purpose to discredit or dismay anyone with my own ideas, but the following may turn up one or two surprises.
So, to begin, we must have a location, a starting point as it were, so that we may follow the characters 'on the ground' and see the sights described in the narrative for ourselves.
Of course there is the remote chance the whole story is pure imagination with no recourse to actual places, people, or events. But we know that Dickens took much inspiration from real people, alive and dead, for his characters, and descriptions of his locations were taken from places he was familiar with. Of course, one of these places was Kent, for he lived there at Chatham as a boy and later at Gad's Hill Place, Higham on the marshy Hoo Peninsula. This area is bounded on all three sides by water.

To the north and west is the River Thames containing Cliffe and Cooling marshes; out to the north-east the sea, flanking the Halstow marshland at St Mary's Bay and Egypt Bay; and to the east the Isle of Grain. To the south is the River Medway flowing past the Hoo marshes. Contained within the Peninsula are several hamlets and small communities, many of which have been used in the story of Great Expectations.
So let us make a start by returning to the opening chapter with the following description of part of the churchyard in Pip's village.

'To five little stone lozenges, each about a foot and a half long, which were arranged in a neat row beside their grave, and were sacred to the memory of five little brothers of mine - who gave up trying to get a living, exceedingly early in that struggle-.....'

The graves of Pip's brothers described here are widely assumed to be situated at the church of St. James, Cooling, and this is not in dispute. Cooling is a small hamlet situated on the edge of the marshes about two miles south of the Thames Estuary. As well as possessing the now redundant but perfectly preserved church of St.James, it also boasts the rather impressive remains of Cooling Castle. John de Cobham built this in 1381 mainly to repel the French invasion, which never came. The 40-foot towers of the entrance built by Thomas Crump of Maidstone, still remain intact framing the more recently built farmhouse situated within.
Adjacent to the church porch at St James, there are several 'stone lozenges' arranged in two neat rows. The row of ten, are the graves of children born to the Comport family in the latter part of the eighteenth century, not one of them surviving beyond a few months. The row of three, are the graves of children born to John Rose-Baker and Sarah Anne. They were born in the early 1800's and also died shortly after birth. It has been suggested that they were victims of the 'marsh ague’, which was prevalent at that time. It was a form of malaria, which was spread by the mosquito, and it was a serious problem for many years until it was finally eradicated at the early part of this century. Later in the story Pip gives the convict some food and brandy, and seeing him in such a state says,

And here we have a slight problem if we are looking for absolute proof that this is where it all began. As noted there are thirteen graves, a row of ten and a row of three, and not just five as Dickens states.
It could be said that in a work of fiction (which it most certainly is) five dead brothers sounds quite believable, but if thirteen were proposed then the reader may question the credibility of the writer, thinking it may be something of an exaggeration.
Is this a case of truth being stranger than fiction? It seems that Dickens had a disagreement with his publisher over the amount of graves, but he appears to have got round this in a rather clever way.

'Mrs Joe has been out a dozen times, looking for you Pip. And she's out now, making it a “baker's dozen”.'

Could the baker's dozen (a term used by bakers to mean thirteen loaves), be a metaphor for the actual sum of dead children buried at St. James's Cooling? Maybe it is a clue to the actual location of the churchyard and the graves situated within. Whatever the explanation I think it is Dickens having the last word, and if death were not such a serious subject, perhaps the last laugh as well.
It must also be stated that each body stone is actually just over three feet long and not a foot and a half, but I feel this to be somewhat pedantic.
Personally though, I feel that Cooling Church is where Great Expectations all began and that the pathetic graves are the ones from which Dickens derived his original inspiration, even though he did not use the correct number. This is borne out by his son Charles Dickens Jnr. writing in the Pall Mall Magazine 1896.

'If there is one thing on which the professors of Dickens topography are agreed, it is that the village of Cooling on the Thames and Medway marshes is the actual village in which Pip and the Gargery's lived.... and a reference to Forster's Life confirms their faith.'

And Dolby in 'Charles Dickens As I Knew Him':

'Many a misty walk we took, to the marshes at Cooling, that we might get a realistic notion of the dreariness and loneliness of the scenes in Great Expectations, made famous by Pip and the convict.'

'The scene is laid at Cooling Castle and the church is Cooling Church.... I know this for an absolute fact having often walked through all that marsh country with my father and we have together looked down upon the little gravestones in Cooling Churchyard.'

Why then is Cooling Castle not mentioned in the story? It is such a prominent feature of the area and stands not a hundred yards from the church. Then, as now, these two features were the only buildings to recommend the village, with very little else in the immediate vicinity. In fact, when Great Expectations was written, it could hardly have been called a village at all. There would have been very few houses, and according to records, very little commerce.
It has been established that a forge stood right next to the church. This was subsequently demolished and the present dwelling now bears testimony to this fact by being named 'The Old Forge'.

'Joe's forge adjoined our house, which was a wooden house....'

'"Show me where you live," said the man. I pointed to where our village lay, on the flat in-shore among the alder-trees and pollards, a mile or more from the church.'

Of course, Pip lived with Joe and his wife next to the forge 'a mile or more from the church', not next door to the church itself. There is however, four miles southwest of Cooling a village that does stand about one mile from its church, and that is Lower Higham. The ancient church of St Mary The Virgin stands at the bottom of Church Street in a small hamlet right on the edge of the Higham marshes. It is exactly one mile from Lower Higham itself. But what of the forge, is there one here?