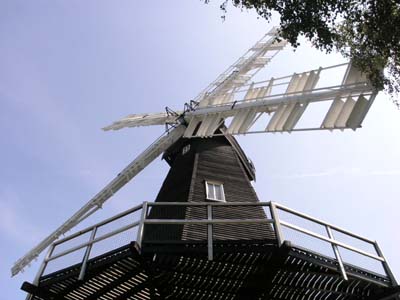 Kentish Windmill
Naturally, due to the abundance of horses at that time there were many forges in and around the Hoo Peninsula and Higham was no exception. Five forges have been recorded in the Higham area alone in the last 150 years. There was one in what is now the yard of the Railway Tavern, and another near the chapel in School Lane; and of course, there was one in Forge Lane. Where Forge Cottages now stand is the original site of Gore Green Forge.
This enterprise comprised a wheelwright, blacksmith, carpenter and a funeral service. The fifth forge stood in School Lane and this was known as Upshire House Forge, but this wasn't built until 1870, some ten years after Great Expectations was written so it need not detain us further.
Could this be the village, which stands 'a mile or more from the Church'? Many writers are convinced that it is, and given the descriptions and details of the topography it is hard to disagree with them. Gadd writing in his study of the subject 'The Great Expectations Country' in 1929 actually states that Lower Higham is 'Pip's Village'. But at the same time steadfastly maintains that Joe Gargery's forge originated from Chalk, a small village a couple of miles away. He could be right. As well as the very detailed description he gives us of the actual forge (Mullinder's Forge which he was able to visit in person), and the matching commentary in Great Expectations, there remains the fact that Dickens spent his honeymoon in Chalk at a cottage near to the forge. Both the 'Honeymoon Cottage', and the original forge are still to be found at opposite ends of Chalk village, and both are, thankfully, in a very good state of repair.

'.... Mr Hubble the wheelwright....
.... and Dunstable the butcher....
.... an obligation always to go through the village from our house in one particular direction, and never to vary it by turning down by the wheelwright's or up by the mill.'

A mill was built at Higham in 1760, and this later became known many years later as Rose's Mill after the miller who worked there. After many more years of service, and then eventual decline of the trade it was pulled down in April 1921. The site and base of the mill still remain however, just over half a mile east of Upper Higham church in Hermitage Lane.

'....as a man started up from among the graves at the side of the church porch.'

There are indeed a lot more graves and gravestones to hide behind at the side of the church porch at Higham than there ever were at Cooling.
But alone this is not proof enough.

'....he made it [the church] go head over heels before me, and I saw the steeple under my feet - when the church came to itself, I say, I was seated on a high tombstone,....'

Cooling Church doesn't have much of a steeple; rather, it has a tower with a roof not unlike a tiled pyramid. St Mary's at Church Street Lower Higham does possess quite an impressive spire emanating directly from the roof of the north aisle. Although the look of the structure fits in better with the narrative, there is no high tombstone - the one on which Pip was seated - in the churchyard. But before jumping to conclusions, there is one other place on the Peninsula, which must be visited. That is the church of St.Werburgh at Hoo some four miles to the east of Lower Higham. Now this church does possess a most magnificent steeple, the most impressive of the whole area. Set on its battlemented tower the whole structure rises a total of 127 feet above the ground. Directly to the west, about 100 feet from the base of the tower is a large and ornamental tomb set above the entrance to the vault of the Everist family.

Could this be the one that Dickens placed Pip after the convict had turned him head over heels? There is one further clue. The tomb is dedicated primarily to the Everist family, but halfway down the plaque facing the church another name is inscribed which I feel is very significant. The inscription reads: "Also Thomas Comport 15 July 1844 55 yrs." The very same surname that is to be found on the little graves at Cooling Church. Coincidence? Maybe, but perhaps it's just another of Dickens's cryptic clues.
So now let us return to where we left off, Lower Higham. Some time later in the narrative when the soldiers, Pip and Joe go searching for the convicts, they leave from their home next to the forge.
We passed the finger post and held straight on to the churchyard.

'.... while two or three of his men dispersed themselves among the graves, and also examined the porch.
.... and then we struck out on the open marshes, through the gate at the side of the churchyard.'

The description of the walk, and the gate, fit in exactly with Lower Higham church. Today the gate can be seen just where Dickens placed it, leading directly on to where the marsh begins proper.
Earlier, the convict threatens Pip and demands that he bring him food, drink, and a file for the leg iron.

'You bring me tomorrow morning early, that file and them wittles. You bring the lot to me, at that old Battery over yonder.'

Today, the area is almost littered with old forts, including one across the Thames Estuary at East Tilbury - Coalhouse Battery. On our side of the water, both relatively close to Higham we have, to the northeast, Shornmead Fort, and to the north, Cliffe Fort. The only problem here is that all of these fortifications were built in their present form well after Dickens wrote Great Expectations. Royal Commission had proposed them all in 1860 as an extra defence of the Thames, but they were not actually built until some years later.
However, two earlier forts had been built in 1795 and 1840 at the Shornmead site. It was because the 1840 one was beginning to subside that the Royal Commission decided to build the present structure. There is another site just north of Cliffe Fort at Lower Hope Point, and a battery was built here in 1795. This was subsequently demolished in 1820 and nothing now remains.
So, the next day Pip makes his way to the convict.

'The mist was heavier yet when I got out upon the marshes,....
The gates and dykes and banks came bursting at me through the mist,....
All this time, I was getting on towards the river;....I knew my way to the Battery, pretty straight, for I had been down there on a Sunday with Joe, and Joe, sitting on an old gun,....
.... I found myself at last too far to the right, and consequently had to try back along the river-side, on the bank of loose stones above the mud and the stakes that staked the tide out.
I had just crossed a ditch, which I knew to be very near the Battery, and had just scrambled up the mound beyond the ditch, when I saw the man sitting before me.'

Both Shornmead Fort and Cliffe Fort are about a mile and a half from Lower Higham church, and both are visible from the present railway embankment. Not a bad walk in good weather, but quite a dangerous treck in the mist and in the middle of winter; indeed, Pip does get confused a couple of times on his journey out to the Battery. But the descriptions of his peregrinations tie in almost exactly with the actual topography of the area even today. We still have to remember that the distance does not have to be exact; it has to fit in with the story. And so the journey has to be believable, otherwise the reader will be looking to discredit the writer, and, of course, this would never do.
So what of Cooling now? Well, regarding the Battery or old forts, there is none here. The closest being the ones mentioned previously, and they are definitely not within walking distance especially on a murky, wintry, misty morning. There is no direct path or track and neither is visible from the church.

'On the edge of the river I could faintly make out the only two black things....
.... one of these was the beacon by which the sailors steered - like an unhooped cask upon a pole....the other a gibbet....which had once held a pirate.'

In the reign of Richard II many beacons were erected in Kent to warn of the approach of hostile vessels, and several were put up along the river Thames as part of a direct line of communication to London and elsewhere. This practice continued for centuries with the beacon sites eventually being used more for navigational purposes. They took the form of a metal basket on a pole, just as described by Dickens. Gadd in 'Great Expectations Country' describes the gibbet that used to stand on the nearby Upnor marshes.

'.... so we followed him to the landing-place made of rough stakes and stones, and saw him put into the boat, which was rowed by a crew of convicts like himself.
.... we saw the black Hulk lying out a little way from the mud of the shore, like a wicked Noah,s ark.'

Prison ships, or convict hulks, were being used at the time to contain criminals whose crimes by today's standards would appear minor indeed.
The idea of confining prisoners in this way was first introduced in 1776 and lasted about ninety years.
Most of the ships used were former Royal Navy fighting ships and these are well documented. The prisoners were used mainly as slave labour and were daily put ashore in the dockyards, arsenals and local towns, and forced to do hard and menial work. Work, which even the lowest labourer was not expected to do. Each convict had two, or at the very least, one leg iron permanently attached to his ankles. This was so that a ball and chain could be put in place whenever it was required. With this in place it would have been impossible to escape ship, as the only fate would have been to sink in the water and mud. If the ball and chain were not connected and a convict did manage to get away, and subsequently pursued, he would be shot on sight. If captured alive, he would be flogged, and the usual consequence of this would be death.
Up to six hundred prisoners were confined in the most appalling conditions on each ship, with punishments being severe for the smallest misdemeanor. This system of punishment ended, not before time, in 1860.
When Dickens was a boy and living in Chatham, three hulks lay in the Medway off Upnor Castle. The names of these old wooden frigates were 'Euryalus' , 'Hercules' and 'Canada'. The latter being a floating hospital ship for the prisoners. Prisoners who died on the hulks were buried in the marsh near Tower Hill at Upnor.