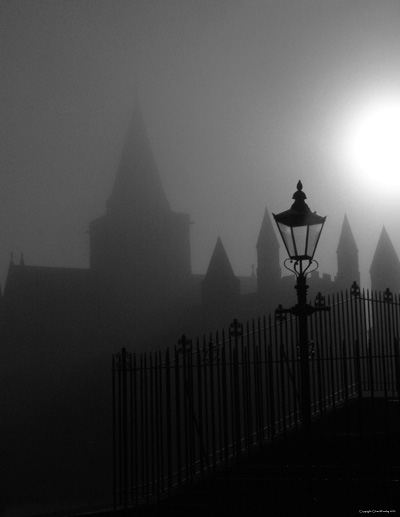 Rochester on a foggy day. The place used in much of Dickens's writing and named 'Cloisterham' in his final book 'The Mystery of Edwin Drood'.

'After an hour or so of this traveling, we came to a rough wooden hut and a landing place.'

Colonel W L Gadd was able to show that a derelict vessel did lie north of Cooling in Egypt Bay. It was used as a coastguards' depot and there was a rough landing stage at the very spot at which Dickens places them in his story.
Egypt Bay is closer to Cooling than to Lower Higham (about two miles across very difficult terrain) but it can be walked comfortably in an hour from Lower Hope Point, the site of a former Battery.
And whilst we are on the subject of distances, later Pip goes to visit Miss Havisham. When he has done so he returns home after leaving a message at Mr Pumblechook's in the High Street.

If we accept that the 'market town' is Rochester, and that Mr Pumblechook's premises is the timber-framed building opposite Eastgate House in the High Street, then we shall find that the distance to Lower Higham is a distance of exactly four miles using roads all the way. Cooling, however, is at least five miles and this would include some of the journey being taken across country.
So Pip returns home to the forge 'a mile or more from the church' and a four-mile walk from the market town of Rochester. Can we now assume that the village where he lived is indeed Lower Higham? With many of the descriptions and facts before us I don't see why not. After all, we have all the ingredients at this location; the only thing missing would be the small lozenge-shaped stones and these can easily be imported from elsewhere, and they almost certainly were. Cooling churchyard to be precise.
To compound this belief let us walk from the ancient porch of St.Mary's Lower Higham, which the soldiers searched, and follow them through the gate at the side of the churchyard. We will now be standing on the very edge of the marsh. If we take the short walk to the railway embankment (which did not exist in Great Expectations) and look across the marshes to our left, we will see Shornmead Fort. If we look straight ahead we will see Cliffe Fort. Although both were built in their present form after 1860, they are both sites of previous fortifications.
We can stand here and actually see the 'gates and dykes and banks' that Dickens describes. We can imagine Pip leaving the convict at the church, making his way home to Joe Gargery's forge to get supplies for the prisoner.
The convict makes tracks in the opposite direction to the old Battery out on the marsh. Later, Pip, Joe, and the soldiers set off from the forge, search the churchyard and porch, and going through the gate at the side of the church, strike out across the marshes in search of the escaped prisoner. Finally they find him and take him to the landing place 'after an hour or so' where there is 'a rough wooden hut'. This is almost certainly at Egypt Bay, which as discussed earlier did contain a derelict vessel and a landing stage.
So here ends the search for Pip's village and personally I feel sure that it is to be located at Lower Higham. The lozenge-shaped stones however, are without doubt those from Cooling churchyard, but with the steeple and the high tombstone coming directly from the church of St.Werburgh at Hoo.

Joe Gargery's forge could have been any one of four in the Higham area at the time, but I must agree with Colonel Gadd here and say that the weather-boarded forge at Chalk is the most likely contender for this title, as it significantly matches the descriptions in Great Expectations. Gadd visited the forge in the 1920's and in his excellent book 'The Great Expectations Country' gives us a very detailed account of the place and the similarities to be found in Great Expectations itself.
Charles Dickens has taken many elements from this area and woven them together to suit his purpose to create a wonderful tale. He has placed them where he feels they best fit, and being a writer does it with complete authority.
But could it be pure coincidence that the places seem to fit just right where they are? No, this is deliberate for I believe he wanted it to be known that this was the area in which Great Expectations is set. The clues are there, and the area is available to anyone with an enquiring mind who wishes to follow in the footsteps of the characters. It takes just a little imagination to believe that it all actually happened for real, and that Dickens was just a spectator. And when we do follow the story 'on the ground' as it were, that is the way it feels, and we also become aware of Dickens himself.
And this should not appear unusual; after all we will literally be walking in the footsteps of one of the greatest writers of all time - Charles Dickens.